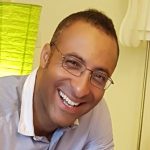 David was born in Togo (West Africa) as his Dad is Togolese. When he was still a baby his parents moved to Switzerland (as his Mum was Swiss) where he was brought up. After completing 3 years of business school he worked in UBS Bank in Switzerland until the age of 24. He then studied theology and evangelism etc in Edinburgh for two years before he worked as an evangelist in Scotland and England for 13 years. Then, with his wife, founded GAM. He has also had ministry opportunities in Switzerland, Togo, Tanzania, Uganda, Ecuador, Norway and India.

He is married to his beloved wife Donna and they have two boys called Caleb and Jadon.

When he has some free time he loves reading, gym, listening to sermons and eating ice cream and being with his family. 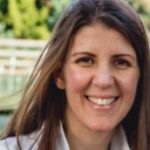 After leaving school at the age of 16 Donna worked In Corporate Markets In Nationwide Building Society. Following a family move she then worked in Branch level within the same Building Society. At the age of 22 she went to study theology and evangelism etc in Edinburgh. After 3 years in College she joined Evangelistic Teams for 2 years travelling throughout England and Scotland before marrying her husband David and working together more within the local areas of their home. Since 1999, both Donna and David have been engaged in various forms of outreach including children's clubs, school assemblies, camps, bible studies and evangelistic courses and many other types of events.

She loves to spend family time with her husband and their two boys Caleb and Jadon. She also loves reading.

Gilda was born in Zurich, Switzerland. She completed a medical school and became a medical assistant. After medical school she finished grammar school to be able to study economic law. In 2016 she started studying at Rhema Bible school simultaneously with a law school in Zurich. Gilda finished Rhema basic training in July 2018. Besides her jobs she loves joining an outreach group where she has discovered her heart for evangelism and His love for all people.

After leaving school Jean worked for the Post Office and local councils in many and varied office roles including personnel, payroll, accountancy and customer service. During that time she enjoyed a multitude of interests with her husband and dogs.
Mainly now her leisure time is taken up reading and pottering in the garden.

Luz is a Filipino Virtual Assistant and Social Media Manager who is keen to expand the work of God. She's married and has a daughter. Luz loves reading inspirational books and listening to Christian music. She also loves to spend time with her family and friends.

Robert is responsible to head up our GAM work in Africa. He is located in Arusha, Tanzania. Robert organises the different crusades and runs all the other projects we are engaged in.

Maximillian was born in Musoma, Tanzania. He received his diploma in theology from Calvary International School of Ministries. He has a passion for evangelism and visiting the needy. In his free time as well as working time, Maximillan loves shooting videos and taking pictures.

Dr Eliah Mauza is from, and living in, Dodoma Tanzania with his wife Esther and their six children.
He has been a Church pastor in The Endtime Harvest Church (EHC) for 21 years, involved in International Ministries for 14 years, and has been an evangelist and missionary for several years not only in Tanzania but also over many other African countries. Through his numerous studies both in Africa and with the USA, he has accomplished many certificates and qualifications including: Advanced Diploma of Pastorate & Church Administrations and Management; Certificate of Missions, Evangelist, Pastorate, Counselling & Community Service; Bachelor of World Missions Discipleship; and from the USA : Theology Degree & PhD of Divinity of Theology.
He has also been awarded Tanzania Peace Ambassador, and holds positions of Director, & Regional Board Member of Human Rights Compliance, and Tanzania Peace organisations, along with Africa Overseer in the African Apostolic Summit.

Sam was born in Uganda. In 2008 he went to a theological bible school for three years. He is a multi-talented dynamic motivational speaker, teacher of God's Word, conference host and crusade Evangelist. His worship ministry is characterised with an anointing of the spirit. His greatest desire is to see that God's people discover, pursue and achieve their God-given destiny. He is a Pastor and ministry coordinator of Jesus Cares Pentecostal Ministries Uganda, one of the first growing churches in Northern Uganda in East Africa. He is married and has 5 children and two adopted.