David flew into Quito, huge political troubles started after the president announced that the subvention for the diesel and petrol will be taken off. That means the diesel goes up by 100% and petrol around 50%. With that, the country’s general prices like food etc. will all rise a lot where the salaries stay the same. The people protested, blocked the roads and vandalized the public transport vehicles, schools closed, many couldn’t go to work and the president closed the airport.

At first all of that looked extremely unfortunate for our work, as many people couldn’t come because of the blocked roads and danger. This opened up a huge window where we had much more time to minister to individuals. Many hours were invested in counselling, deliverance and healing. It was hugely profitable for the long run as key people in the work of God have been served and God is opening up the way for the future for them. The satanic attacks were very forceful during these days as they have greatly blocked and hurt those individual’s lives in the past.

The airport opened again and the concern was if we can get to the airport because of the political commotion. Over 100,000 indigenous were on the way on foot walking for a few days from the South and the North to block the streets and protest. This was the biggest political unrest Ecuador had since decades. The timing was amazing as David could make it to the airport just before all of that took place. They closed the roads behind David and if he had been a few minutes later he would have been stuck in the country for some time. Nobody could have planned the arrival and departure date, better than God Himself.

By God’s grace we still could run the whole programme for the seminar and street work. We condensed everything to one day. It went very well.

The only downside was that many people who planned to come couldn’t. After the workshop and teaching ‘evangelism’ we went to a park in twos praying for people and sharing the good news. David thought it was so much easier than in England.

Nearly all of us had many great conversations and could make an impact in the park. Afterwards when we met again for a recap, the whole group was very encouraged and a new perspective of evangelism was opened for the church.

We wish you a Merry Christmas and a Happy New Year! 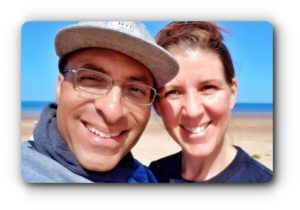 After a traumatic experience in which demons entered me, I was introduced to and delved deeply into angel cards and new age beliefs for four years. I was soon given the ‘gift’ of clairaudience, (Psychic hearing) – although the demons told me they were angels and archangels and even God himself. I could hear them talking to me just like I hear everyone else. They talked all the time to me, day and night, gradually taking over my life until I was virtually an unthinking puppet. Then one day, they offered me a temptation that I felt deeply was very wrong and I refused it. God then gave me chances to flee this life by showing me, how one of my new age teachers had turned Christian and by allowing me to see my vices and stop them…which I did immediately…I’d been blinded to what I’d become. Then God led me into a church where I was immediately welcomed and accepted by the Christian people there. Two weeks later I was ready to commit my life to God even though I was plagued by the demons still. David was preaching at our church that day and he kindly agreed to deliver me from the demons and led me to God. I repented of my sin and gave my life to Jesus there and then. After the deliverance session the demons left me that day thanks to God and David. Through the following weeks I was still battling demons as they wanted to come back while learning about Jesus and avidly reading the bible to hear God’s word and learning about the Christian life. All the time God was with me and David was encouraging, informing and giving me tools to fight the demons (David kindly allowed me to use his draft booklet about ‘Getting free & staying free’ which was absolutely invaluable to me and will be a powerful tool for others when it is published). At my church in front of the lovely members of the church, all having helped me in so many ways, David baptised me. He is still helping me transition into my new Christian life and I am so very grateful, endlessly thankful and full of praise for God and his wonderful teamwork with David and the church that has helped me grow stronger.